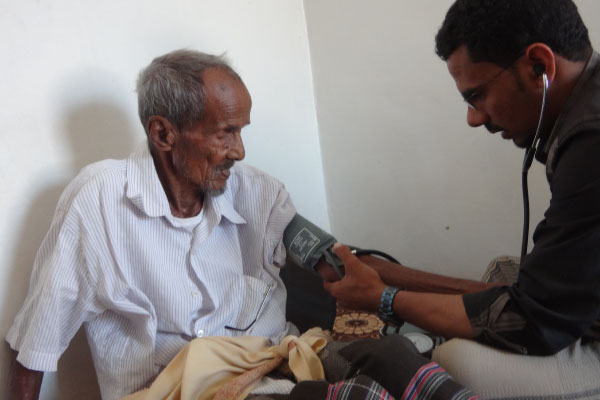 An outbreak of cholera in Yemen earlier this year killed more people over the age of 60 than any other age group.

Cholera proved deadliest to older generations because our immune systems become more vulnerable in later life. This lower tolerance, when combined with deadly food and water shortages, is sending older people into crisis.

‘The immune systems of millions of people are now literally collapsing, making them – especially children and the elderly – more likely to succumb to malnutrition, cholera and other diseases,’ says Mark Lowcock, UNOCHA’s Under-Secretary-General for Humanitarian Affairs.

One-third of older people who contracted cholera in Yemen died from the disease.

Treat 32 people at one of our mobile clinics

Crisis in Yemen is reaching a breaking point

With a third of Yemen's population considered to be on the brink of starvation, increased and inclusive humanitarian aid is needed now to ensure the urgent health, nutrition and protection needs of older people in Yemen are met.

Much of the country - already the poorest in the Middle East - has been torn apart, and 14 million people currently depend entirely on international aid for their survival.

The scale of this disaster requires urgent action. The situation facing older people is truly desperate; hospitals have been destroyed or damaged, and conflict has prevented medical supplies, water and food reaching those in need.

Standard food rations are not suitable for many older people, who struggle to digest them, and there is a lack of clean water to prepare food. Some people are not mobile enough to get to food distribution sites.

Those who are physically unable fetch clean water are paying others to do it for them. In desperate circumstances, this system is unreliable and leaves older people open to abuse. Nor does everyone have the money - according to our estimates, 95% of older Yemenis have no access to any income.

Only half the health facilities in Yemen are functioning right now - making healthcare a rare and expensive commodity. At least 50% of older people are totally unable to access healthcare. Of those who can reach it, only a tiny fraction - 2% of women and 3% of men - can afford the medicines they need.

Chronic illnesses, which tend to impact older people more than the general population, also pose their own set of specific complications. For example, insulin medication needs to be refrigerated to ensure it is effective - but power cuts are turning off fridges and ruining supplies.

You are helping us take action in Yemen

Age International is currently working with partners in Yemen to conduct fresh needs assessments, so we can continue to reach the most vulnerable with the things they need.

Right now, 1.65 million older women and men in Yemen are in desperate need of aid.