We choose to challenge gender bias, ageism and inequality

Age International regularly engages with other organisations to encourage them to think about women of all ages within their efforts towards women’s empowerment. On the ground, we listen to older women and include them in our programmes, but we also involve older men in discussions about gender and equality - helping to change perceptions.

Women must deal with inequality throughout their life and in older age this is compounded by ageism. But much of the debate about improving equality for women focuses on younger women and girls, reinforcing the idea that older women don’t matter. We want to see older women recognised as equal members of society, and their contributions acknowledged.

Women of all ages face barriers in accessing education, resources and services. Cultural expectations about the role of women may prevent them from participating fully in society. This can make women particularly vulnerable in later life, yet life expectancy is continuing to grow around the world with women living longer than men.

Older women may be seen as a burden and mocked, harassed and even subjected to violence and abuse. In many areas, a lack of property rights may lead to a woman being made homeless upon the death of her husband. Widows and women displaying dementia symptoms are often targeted with witchcraft accusations, putting them at risk of threats, beatings and even murder. Yet older women are too often overlooked in surveys and data collection on violence against women, which tend not to collect information on women older than 49. This is just one of many reasons why we are calling for a UN Convention on the Rights of Older People.

Older women are also often overlooked by policymakers and excluded from government schemes and international development programmes. But why should they not have the same rights as others to claim a pension, access the healthcare they need and receive adequate nutrition? We advocate for older women to be specifically included in programmes and their specific needs considered. In our own work, we listen to what older women tell us they need and design our programmes with this in mind.

Our work on
ageism and sexism

Older women are often the lynchpins of their communities and contribute to society in a myriad of ways including through both paid and unpaid work. Our 2018 report on older women’s work (Who Cares? Why older women’s economic empowerment matters for the Sustainable Development Goals) found that older women do twice as much unpaid work as men and that they increasingly take on informal paid work to supplement their family’s income.

But the contribution of older women is often not recognised by the community, society, or government. Many must labour all day at their paid job only to return to do hours of work at home, with women still shouldering the burden of unpaid domestic and care work. This demanding lifestyle can become increasingly challenging as women age and it takes a toll on their health. Older women's contribution should no longer be invisible and they must be supported to access dignified work and social protection and given equitable access to other resources and services.

That’s why this International Women’s Day, we #ChooseToChallenge both gender and age inequality. 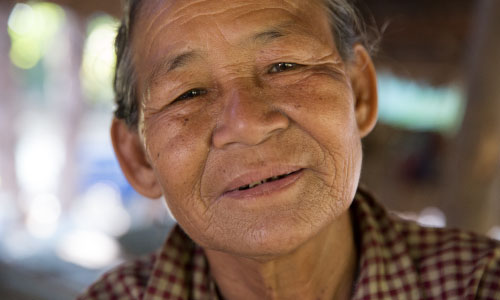 Women face even more challenges as they reach later-life. It is time for equality at all ages.