Older people in Ukraine must face the heart-breaking decision of whether to stay home and face the dangers of the conflict, or uproot their lives to become a refugee. It often means being separated from loved ones either way. We met with Galina, 63 who has decided to stay at her home in the Donetsk region of Ukraine, while her children and grandchildren moved further away from the conflict zone. 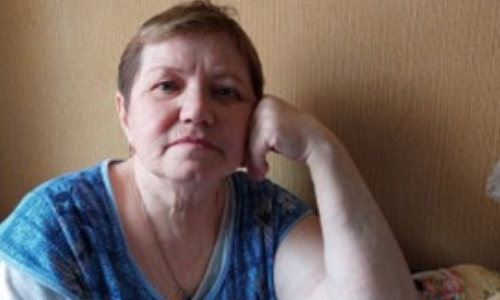 I’ve already lost my home once. When active hostilities began in 2014, my house was completely destroyed. I moved to another village and I don't want to go anywhere now. I have decided to stay.

My children moved further from the war zone and they took grandchildren. I know that it is already very difficult for them, so I do not want to burden them. I am extremely worried about them. Often, we cannot call each other because the connection is bad.

One night there was heavy shelling, everything rumbled, the earth hummed, windows flew out of the houses, the power supply was interrupted. The conflict has been happening for eight years, but now it is especially hard.

Now is a terrible time. Many have been left homeless, including older people. Many of those who left now have no home to return to.

A HelpAge volunteer helps me, she brings me food. There are no ATMs, so I can’t withdraw my pension, and there’s no way to pay for groceries. Fortunately, the shop allows you to borrow. A volunteer often buys food, especially bread. She helps.

Medication is more difficult. Previously, I could buy them in a neighbouring village, but now I can’t get there because it’s too dangerous.

I believe in God, and I pray that the war ends soon. I want to at least survive, to meet my family. I dream of meeting my children and grandchildren.