Ukraine Crisis: I had to leave my home and family

Many older refugees in Ukraine are trapped in their homes, with basic services and utilities disrupted, due to the conflict. But even for those that escape and receive support thanks to the Age International Ukraine Crisis Appeal, adjusting to the loss of a home and a way of life is another challenge, as Valentina found. 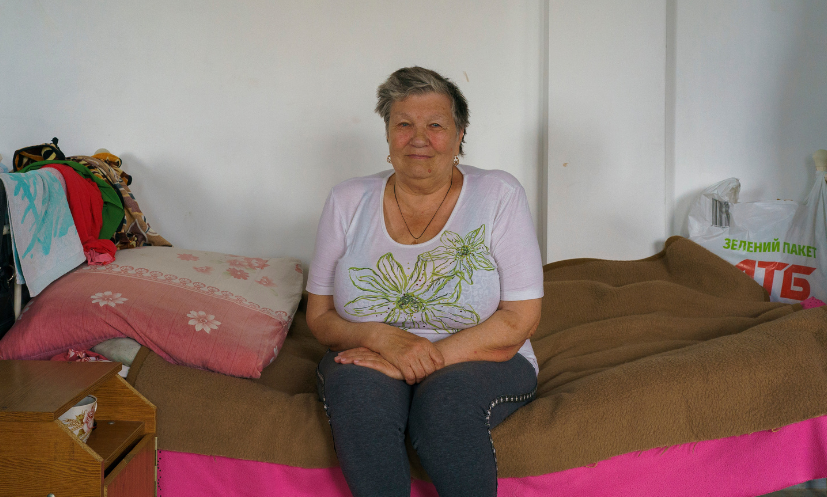 Valentina, 68, lived with her son and daughter in Lisichansk in Eastern Ukraine, until the conflict forced her to flee to Dnipro.

“…They were shelling and we were lying on the floor, afraid to even leave the area. We had no electricity and water. We spent most of the time in an underground cupboard. I had a stroke in 2018 so it was hard for me to get up and down.

“The last night I was there was extremely horrible, we suffered a lot. After surviving it, my youngest son took me and one great-grandchild towards Dnipro.

“We didn't understand what we were doing. It was so frightening that night. We were so glad that we made it through that in the morning we just got in the car and left. Our hands and legs were shaking. “My other children are still in Lisichansk and my soul hurts for them, they didn’t know we were leaving, and we didn’t have space. Now they live in their basement and there is little phone connection. They want to leave but people say now that no one can get out of the city because the road is being attacked...”

Many older refugees like Valentina who have had to leave their loved ones, homes and lives behind find themselves at a loss when they arrive at the shelter, despite the support they receive from Age International.

“At home, I played a fishing computer game and grew beetroot, strawberries, carrots and cucumbers. I would make pickles. I didn’t have a big garden but I had something to do. Here there is nothing. I miss my Turkish soap operas – some of them are not even translated into Ukrainian but I would cry watching them anyway… I want to go back home very much.”

As well as supporting and advocating for older refugees like Valentina in Ukraine and surrounding countries, Age International's network of volunteers is also providing vital support to vulnerable older people who remain at home in the conflict-affected regions, unable or unwilling to start a new life as a refugee.