Older women contribute so much to society

Diane Elson, 75, is an academic expert on gender and development as Emeritus Professor at University of Essex. She also gives her time as a volunteer for the UK Women’s Budget Group and is a grandmother-carer. She is passionate about Age International's new report, Older Women: The Hidden Workforce, and she sat down with us to explain why and what needs to change for older women.

Why is our report, Older Women: The Hidden Workforce, so important?

I feel very passionate about the report. I should, because it covers so many aspects of my own life, except that I'm so much more fortunate because I have a good pension. I'm a grandmother-carer, so tomorrow, I'll be collecting my granddaughter from school and looking after her, until her parents come home. It's something I enjoy, but it's a contribution, this unpaid care work that so many older women make in different ways around the world, which is very often invisible both to the policymakers and indeed often to their own families who take it for granted.

What particularly struck you about the findings in the report?

First, that the report makes very visible the amount of work, both paid and unpaid work, that older women do, which is rarely captured by data - by censuses and surveys, by the kind of statistics that policymakers use when they're designing policy. Either because they have an age cut-off and they define the working-age population as between 15 and 60 and they just don't look at you if you're older than that, or because the surveys do include older people but lumped together - they don't differentiate between the different situations of people over the age of 60.

It's very important to look at differences as well as commonalities between women who are over the age of 60.

What needs to be changed or done to recognize this vital contribution older women are making to their societies, communities and families?

First, we have to have much better data, we have to stop excluding older people and older women in particular from data collection exercises. And then we have to disaggregate the data more carefully and look over the whole life course.

If in the world we live in today, you don't have access to money in your own right, either through decent work opportunities or through a good universal social pension, you're really in a difficult position.

Secondly, money. It's just not true that older women without money of their own are somehow cared for by families and communities. Those systems might have existed in former times, but now they've been fractured - by migration, by the growth of the market - so we can't rely on them and it's really important that older women have money in their own right.  The report has many examples of how older women are denied access to or are worse placed than younger women to access decent work, either as wage workers or own account workers. 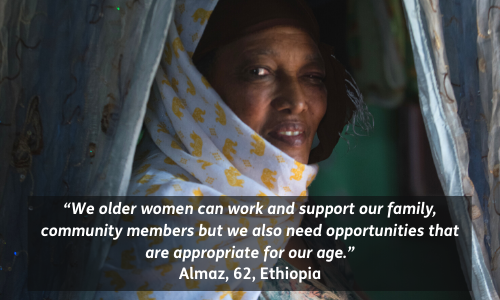 One of the things the report brings out is how access to a social pension in old age also enables women to do better in terms of accessing decent work. It gives them more choice. If they're not offered good, decent, liveable wages and conditions, they can say no if they have something to fall back on.

For those with a pension, if they are offered better employment opportunities, their pension will provide a kind of underpinning - a floor on which they can stand and do other kinds of work. This includes unpaid care work, which is so important and which in low-income countries extends to subsistence agriculture, growing food for the family, collecting water and fuel - it's not only personal care of children, grandchildren and sick people.

One more thing I think needs to be changed - voice. I think the report brings out very well the progress in enabling the voices of some women to be heard in national and international discussions of policy. But there's been some neglect of older women, and there's a lack of emphasis and energy about bringing older women into the dialogues, enabling older women's voices to be heard. The report does a good job of bringing the voices of some older women into the public space and we need more of that.

Women have often been invisible in the past, and we've made a lot of progress in increasing the visibility of women in development. Older women have been left out because they suffer this double discrimination and the disadvantages of gender and of age. So it is really important to make their situation visible and visible as actors, not only as dependents.

Globally, older women are contributing unrecognised yet critical support to their families, communities and economies through their paid and unpaid work. Our new report gives voice to older women’s experience of work and sets out recommendations for how to address this inequality.